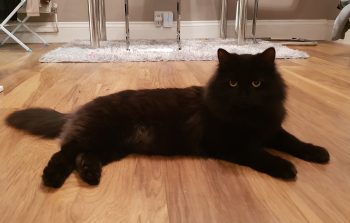 We’re really enjoying having our Fluffy friend around. She has become very sociable and loves being where people are. There’s play time on tap, full roam of the house and a good brushing daily to stop all that beautiful fur getting matted and messy…although it costs a great deal of Dreamies! If you go near the kitchen there is a barrage of meows in case she’s missing out on food, but don’t be fooled, she eats well enough 🙂

Her best friend ‘Pink Mousey’ goes everywhere and she taught herself how to play fetch, but only with Pink Mousey, no other toy will do. Grey Mousey had to be hidden because that’s too terrifying for reasons only Aurora knows about.

Most days are spent sleeping, playing, patrolling and trying to steal bread… She loves bread, but I’m not sure it’s part of a cat’s dietary requirements… So we’ve hidden that too…with Grey Mousey.

Aurora has a lot of character and is great fun. 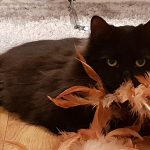 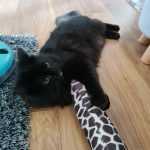