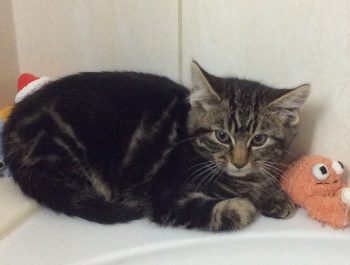 In December we were asked to help trap, neuter and return several feral farm cats. Two Toms were caught and sorted out and then the trap was left for the farmer to catch another cat, but instead of trapping an adult cat, two kittens, who were approx 10 weeks old, were caught. We decided not to return them to the farm but to find them a foster home and then find them new homes once they were socialised. We called them Rudy and Laurel, both were very scared and very good at hissing whenever anyone went near them.

All was going according to plan until Sunday 29th December when Rudy became very ill and had to be rushed to the Emergency Vets, VetsNow at Meir Park, who found that his temperature was over 40C . They immediately gave medication to try to reduce his temperature, used a fan to blow cool air over him, did blood tests to make sure his kidneys were functioning correctly before giving antibiotics and putting him on a drip. They monitored him throughout the night, but there was no change. On Monday he was still very ill. X rays, scans and further blood tests couldn’t pin point the problem. We feared the worst and were ready to make that awful decision as we couldn’t let him suffer. Then his temperature started to go down and he started to eat. Everyone was amazed, relieved and absolutely delighted.

For several days he remained at Lime Trees Veterinary Hospital, Meir Park where he was given the best possible care and through the expertise and diligence of the vets and nurses Rudy survived.
He is now back in his foster home, eating really well and playing once again with his sister while we are left to pick up a very big bill, but we couldn’t have given up on him. We had to try to save his life. He’s only a kitten after all and has his whole life in front of him.

If anyone would like to help towards the cost of Rudy’s treatment we would be most grateful and you can do so via Paypal (see our https://www.cheadleanimalwelfare.org.uk/donate/ page or you can make a donation via https://donate.giveasyoulive.com/fundraising/rudys-rescue

Thank you so much.

Rudy is a very special little cat and will now have the chance to grow up into a very fine tabby tom which would not have been possible if he hadn’t come into the care of Cheadle Animal Welfare Society.