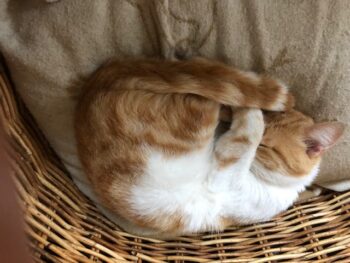 Thank you for finding a new home for me and Norah. We are getting on very well and enjoying our new surroundings.
I found it a bit boring having to stay in for almost two weeks but I took the opportunity to explore the house and inside cupboards and drawers when they were open. I also jumped around the study and settled down on the desk when someone was at the computer. Norah spent most of her time under the furniture and hissed when anyone approached.
Now that we are out and about, I’m really enjoying life. After tea I like to go out and catch mice or shrews and bring them back inside. Last week I caught a shrew and brought it into the dining room where I played with it. Let it go, catch it, let it go, catch it, let it go, catch it, whoops it’s gone under the cupboard. Then my new owner joined in and tried to catch it but to no avail. Twenty minutes later I found it in the kitchen and settled for having to swap it for some Dreamies. I think I’ll do that again.
Norah has been outside, and initially not very far from the house. However, one morning after breakfast she went out and ran off. She didn’t come in for her tea; she was missing all the next day; and it was under cover of darkness the following day that she crept in for her tea. She went missing the next day, but I discovered that she has made her home under the woodpile at the back of the house. She comes in for most of her meals and stays in all evening until she gets her bedtime Dreamies. When she is in, she likes some fuss and now only hisses if Desmond the lurcher gets a bit close. Me and Desmond are now good friends – he knows his place! 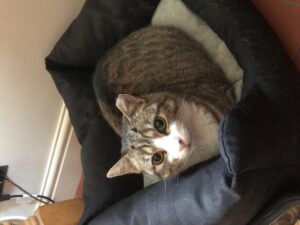 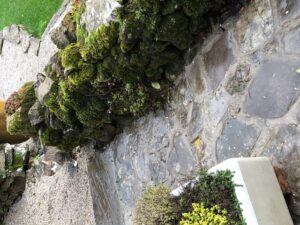