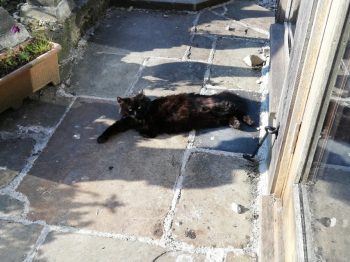 When Meg came to us having had a littler of kittens she was very scared and spent most of her time hiding under her bed. When visitors went to see the cats she was nowhere to be seen until Chrstine visited the cattery. She immediately came out from under her bed as she had already decided that was the person she wanted to live with. This is what her new owner told us once she got her home:

She didn’t last long hiding in her igloo, after a walk round the house checking out the rooms, she has settled on a bedroom.
At first she’d hide under the bed but now she either sits in the window watching birds or sleeps on the bed. I’ve placed a covered litter tray for her which she is happy to use. She still likes a cuddle and I’ve told her she is a time waster. Meg is eating well and just started today to play with her toys. I haven’t let her out yet I’m letting her do things in her own time as she is still nervous.

Later Christine said:
Meg has settled in completely as a much loved member of our gang. She has just started going outside now in the sunshine, as we have the back door open, although she doesn’t go far as yet.

She loves a cuddle and is always ready for us to sit down so she can jump on a knee. 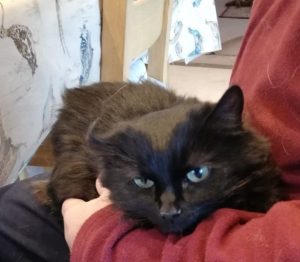