HOW COULD ANYBODY BE SO CALLOUS AND NEGLECTFUL? 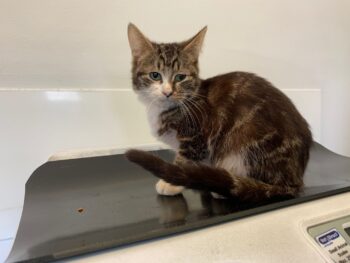 Going for a gentle ride on a horse along an idyllic country lane in Church Leigh is usually fairly uneventful. Not so for Terri and Amy on Monday 14th March as they spotted a young cat in the hedgerow and then another and then another.

In all there were 7 of them.

All were scared and very thin. There were no houses or farms in the near vicinity so they must have been dumped earlier in the day. Terri and Amy went back a little while later and managed to grab 2 of the cats. A ginger female and a male tabby and white, both 4 – 6 months old and took them home to care for them.

Cheadle Animal Welfare Society was contacted and a visit to the Lime Trees Cat Clinic was arranged for the following day. Rosie, a very pretty ginger kitten was found to be badly infested with fleas and had a nasty skin condition. Smudge, a tabby and white tom was emaciated and he too had a huge infestation of fleas. Bloods were taken and Smudge was found to be dangerously anaemic, but thankfully negative for Feline AIDS and Feline Leukaemia. His condition was so serious he was admitted to Lime Trees Veterinary Hospital and put on a drip. We have everything crossed that he will survive. Later in the day on Tuesday 15th March 2 more of the cats were caught with one of those also being found to be very anaemic caused by the heavy burden of fleas. He too had to stay overnight at the vets. 3 more of the cats have now arrived at the Vets too. Sadly one little cat had died under a hedge before he could receive any help.

Now, where had these cats come from? Who could be so callous and neglectful to have let them get into such a state, do nothing about it and then dump them in the middle of nowhere? Words fail us. It is all so shocking and upsetting.

A fundraiser has been set up to help pay for the veterinary care needed by these young cats. If you feel able to make a donation, no matter how large or small, Cheadle Animal Welfare Society would be most grateful and so would Rosie, Smudge, Tinker, Tom and the 3 other cats as yet unnamed.

You can make your donation via https://gofund.me/0c75df3c
then search for Cheadle Animal Welfare
Thank you very much indeed. Your support is greatly appreciated. 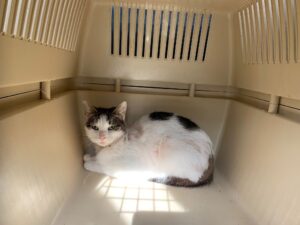 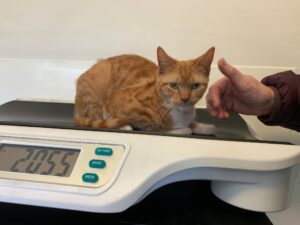 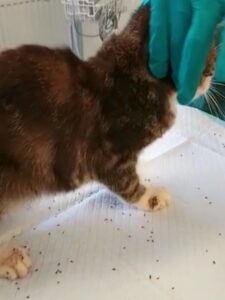 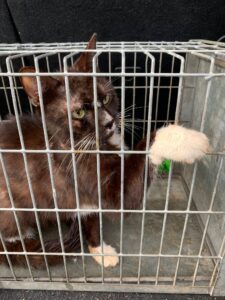 We visited six of the ‘Church Leigh Seven’ cats today (22nd March) in their lovely foster home; they are settling in well and are absolutely gorgeous. Because they need building up, they are being fed three small meals a day – two cats in particular are very thin and all of them have hair loss due to the flea infestation. Smudge, the seventh member is also settling into his new foster home and no doubt is being spoilt rotten! All seven cats are still receiving treatment from Lime Trees Cat Clinic in Cheadle and are being closely monitored by Vet Jodie and her team.

As you can imagine they are eating for England so if anybody would like to donate cat food / cat biscuits they can leave contributions in the donating bins at Morrison’s Cheadle, Cheadle Pet Shop or Pets at Home Uttoxeter.

Thank you to everybody who has donated money or food and for continuing to ask about these unfortunate but now very lucky cats. Hopefully now in our care, their future will be much brighter.