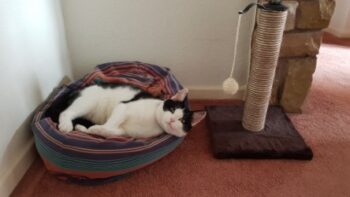 Gino is now going out on his own throughout the day. He has mastered the cat flap going out but is not so good coming back in. So, at the moment, when he exits, I prop the cat flap open for coming in and he has no problem with that. I’m confident that before long, he will master coming in through the catflap without my help. I lock the catflap at night and he seems fine with that as he usually ends up in the bedroom with me. However, he does like to go out early and so when I hear him battering the cat flap (usually any time between 6am and 8am), I get up and let him out.

I have bought a tracker called “Tabcat” which I highly recommend. It is ideal if your cat doesn’t go far and if I ever get concerned about his whereabouts, 9 times out of 10 I can usually find him with it. The tracker is attached to his new collar which has his name and phone no. embroidered on it, and he doesn’t seem to mind wearing it at all. It certainly didn’t stop him climbing 15 ft up a conifer tree in my garden trying to locate a collar dove! I had great fun trying to get him to come down! 😂

On an amusing note, I found that Gino wasn’t mad about drinking from his water bowl. He frequently tipped the bowl up and drank the spilt water off the floor! Also, whenever I filled the kettle to make a cup of tea, he would jump up to the sink and try to headbutt the kettle out of the way to get at the stream of water (one of my previous cats used to do this). So, I have invested in a water fountain for him which he seems to like very much.

He is an absolutely wonderful cat and a great character. I sensed he was the one for me from his picture and when I first rang you, I thoroughly expected him to have already been rehomed. For once, COVID-19 did me a favour as lucky for me, he was still available. 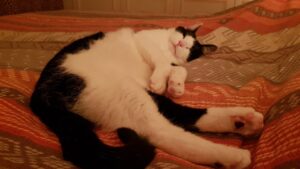 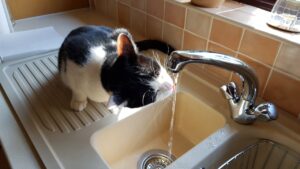 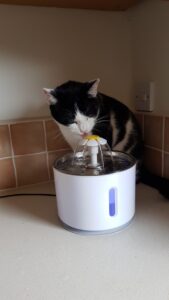