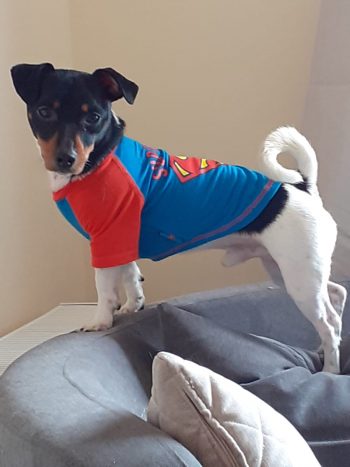 When Paddy arrived with us, he was a very anxious little dog.  In his previous home he had been given little training or interaction and had not really been taken for walks. At first he did not know what to do when he was taken out and had developed behavioural issues as a result. What he really needed was someone who would be patient with him and his issues and be prepared to spend lots of time with him providing exercise and stimulation.

Happily for Paddy, he was offered this by Vicki and Paul and we are really pleased to report that he is thriving with them.

Paddy is rarely left alone, he goes out everywhere with them (including on regular holidays to Scotland and the Lake District) and even gets to go to work with Vicki.  They realised early on that he did not want to be left alone overnight and he now sleeps in the bed with them!

He loves his walks now and enjoys meeting ducks and other dogs. He gets on very well with the 3 huskies that Vicki’s mum has and is best friends with next door’s cats, one of whom often comes into the house to see him.

Paddy also loves wearing clothes and has a fine collection of T-shirts including a Hawaiian t-shirt, a batman top, a sweatshirt for cold days and one reading “Eat, sleep, treat, repeat”!

He enjoys going to the pub; being so tiny and cute lots of people are interested in meeting him and he loves the attention.

His behaviour has vastly improved and he now realises that he is there to stay and has a new mum and dad who love him very much and won’t be leaving him.  On our visit it was fantastic to see that he was so chilled out and happy.  We are all very pleased for Paddy, well done little man! 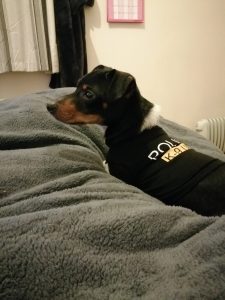 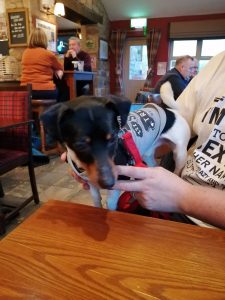 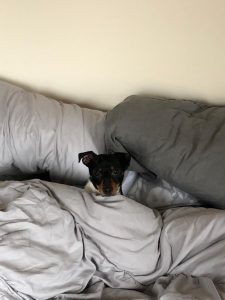 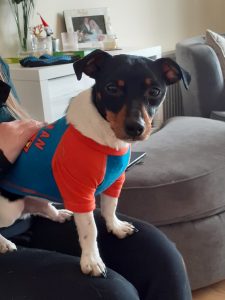